In the fourth episode of the TTSA Talks Podcast, Tom DeLonge, Chris Mellon and Luis Elizondo engage in a captivating conversation about The Intelligence Authorization Act for 2021 that the Senate Select Committee on Intelligence recently introduced, which includes an official public request for a UAP Task Force and an unclassified UAP report. Episode four will explore an analysis of what the legislation means if passed, who is accountable for the report, the difference with AATIP, how Special Access Programs work and an explanation of the UAP threat narrative.

Unidentified: Inside America's UFO Investigation is returning for season two on 11th July 2020

Admit it. You know you've done it. Anyone who has ever heard Tom DeLonge belt out his distinct So-Cal snarl on an Angels And Airwaves, Boxcar Racer or old school blink-182 track has tried to imitate his vocal delivery. In this APTV exclusive interview, Tom DeLonge recalls the first time he heard his signature "Where are yeeeeew?!?!" sung to him and reveals the pop-punk legend who he's been trying to sound like over the course of his career.

DeLonge also discusses the modern post-punk band that he and Travis Barker fully backed, divulges what he considers to be his greatest weakness and opens up (as much as he's legally permitted to) about his ongoing pursuit to make a connection with extraterrestrial lifeforms.

Tom DeLonge on the Pentagon Releasing UFO Videos: ‘I Can’t Believe We Pulled This Off’

DeLonge talks about the government’s new declassified clips, and the future of Blink 182

Tom DeLonge, one of the founders of the influential rock band Blink-182, and co-founder, chairman of the board, and chief executive officer of To the Stars ... Academy of Arts & Science, talks about how he was able to get the U.S. government to admit for the first time the existence of UFOs.

Another milestone was achieved this week for space tech start-up To The Stars Academy of Arts & Science (TTSA) when the Pentagon officially released three videos of Unidentified Aerial Phenomena (UAP) to confirm the footage that was taken by U.S. Navy fighter-jets was authentic. This is the first time in history the Department of Defense has officially acknowledged the existence of Unidentified Aerial Phenomena.

Marty and Danielle talk with one of our favorite locals - former Poway resident, Tom Delonge!

They discuss his new Angels & Airwaves track ‘All That’s Left Is Love’, and how 100% of the proceeds will benefit Feeding America San Diego! They also discuss his famous “WTF” meme, the early days of blink-182, his epic quarantine cabin, and more!

“I’m Always Going To Try Things That People Think I Can’t Do:” The Reinvention Of Tom DeLonge

Far removed from blink-182’s juvenile past, Tom DeLonge is a renaissance man on a mission with Angels & Airwaves.

Tom DeLonge and I became close friends at 19 in Southern California, and even back then he couldn’t stop talking about UFOS. We met at a time where my surf career was more likely to succeed than his ambition to become a rock star, with his band Blink-182. As you know by now, Tom was bound for the stratosphere. Whether it be music or anything he felt compelled to follow through with to the end. That’s where we are now. Tom’s music might always be what people think of first. But, it’s no surprise to Tom, or anyone close to him, the unknown he seeks might bring him to even greater (perhaps literal) heights. His company, To the Stars Academy of Arts and Sciences, has been a hot topic of late after video footage it brought to light was confirmed to be legitimate footage of an unidentified flying object by the US Navy. Then To the Stars signed a contract with the US Army. He’s even got a show on the History Channel on all this. Tom is set on changing more than just people’s understanding of the unknown, but what it could mean for the future and much more. You’ll see.

Tom DeLonge: “I’ve Been Gone From Music For A While – And I Feel That I Have A Lot To Say”

Tom DeLonge of ANGELS AND AIRWAVES stopped by for a quick chat with 105.7 The Point's Donny Fandango before the HoHo Show on Monday, December 16th, 2019 at The Pageant in St. Louis. Tom comments on his UFO research, getting the world to come together on the subject of unidentified aerial phenomena (UAP), To The Stars Academy, and much much more... Donny and Tom even talk about nose and ear hair! Big thanks to Tom DeLonge for taking the time out to chat with us. 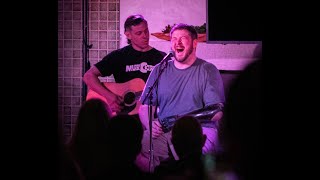